In early December, 2019, I took my friend and Los Angeles coordinator, Lenna, to a park near her home in Pasadena. She wanted answers to troubling questions. This is best solved by a Wisdom or Teaching Tree. She had never heard answers from a tree before, although she had experiences of flowers and bushes waving at her and giving her signs of delight when she related to them.

Different trees have different roles in relation to humans. This Pasadena park had a large circle of old oak trees. I hesitated. Oak trees at the Earthrise Retreat Center in Petaluma CA were largely sentinel trees. They were looking out for the people there, protecting them, bringing energy down, and helping people tune in. They were watchful. And most of the ones at Earthrise told me their role was not to communicate with humans. Remembering that, I wasn’t certain whether these Pasadena oak trees would talk to Lenna.

It may take a while to find which trees each person can relate to most easily. So I was on the lookout for my friend as we walked into the park. She didn’t seem to find ones that resonated. At first, I didn’t either.

Then I saw one very old, very large gnarled oak tree with a generous leafy canopy that came almost to the ground. It had two major trunks, about equally balanced, growing from one main trunk and root. I felt drawn to that tree and called her attention to it. 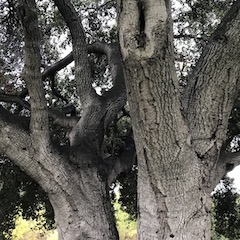 Double or multiple trunks can be a sign of a wisdom or teaching tree. They may have answers when people are pulled in different directions, or have difficulty with decisions. Those trees have learned to share resources and nutrients, and contribute to each other’s well being. This is true whether they are two trees coming from intertwined roots, or one tree with more than one trunk. 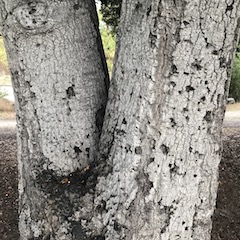 This tree had several faces on it. In one of the top faces, it seemed as though it had its eyes closed, not hostile, perhaps trying to shut something out, mellow, mischievous or meditative. 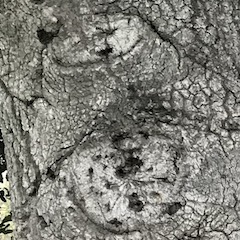 The face just below it was harder for us to decipher. To me it looked as though its crown chakra and third eye were open. The squinty eyes, clear broad nose and mouth don’t show so well in this picture. To my view, it seemed to be taking in a great deal of information.

However, it looked frightening to Lenna.

After making some effort to open her heart, she got more and more distressed by the faces and the energy of the tree. She started closing down. Fear is not a good way to learn to communicate with trees. I realized something needed to shift.

What was I to do? Then I remembered. My local back yard trees (“anchor trees”) had spirits that jumped from Tryon Creek State Park to share their love, wisdom, guidance and mentoring. Before this trip, they had promised to be available for both me and Lenna. And it was obvious that we needed their help. So I called on them.

Portland trees to the rescue!

They came right away. I sent my roots down into the earth to draw on the strength of the anchor trees. Their energy flowed into me like sweet maple syrup. I poured their love and power into the old oak tree. Immediately, he came alive. He said, gruffly, “Don’t expect me to be one of those lovey-dovey trees!” I gently agreed, glad he was talking.

He asked, “Do you hear the men behind you?” Lenna and I could both hear the cursing behind us. Lenna explained that men and boys came to the park, especially the frisbee golf section ringed by these old oak trees. They smoked, spat, talked rough and behaved rudely, all the time.

The tree followed up on what Lenna was saying, and said that we could call him Grumpy Old Man. He had a huge job to do, along with the other oak trees. Their mission is to neutralize and detoxify the men and boys who came to the park. They cleansed them enough of their anger and resentments, so that they could go back into human society, to their families and children more mellow, to not be creating harm.

Grateful to Grumpy Old Man and his team of trees

I got the impression that these stalwart oak trees deliberately attract these boys and men, in order to be of service to us. When I explained this, Lenna agreed they were much needed. She started softening and overcame some of her fear. We nicknamed him GOM. 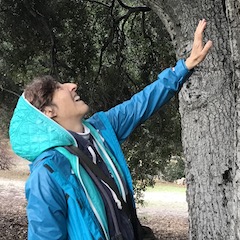 Lenna (pictured, above) was much happier with GOM and grateful for the major job that he’s doing.

As we were driving away, my home trees conveyed more information to me from GOM. He said that he was glad that we were attempting to teach humans to communicate with them. That if more of us were focused on uplifting humanity, it would relieve the toxic load on the trees that are serving to cleanse the atmosphere and the earth.

Although they are called to be of service and they fulfill the calling, they also experience and react to our emotions. And they do feel pain. They were hurting from the hostility and absorbing human hurts. We owe them a lot. And it helps them when we show our gratitude. 

At the next visit, GOM expressed his thanks that more people are learning to talk with trees. He told me I could also convey his thanks to a FB group called Tree Lovers, Whisperers and BioBalancers. That group advocates collective efforts to awaken humanity to love for trees and Nature.

Lenna told me the same messages of GOM’s gratitude. I am grateful she can now access his wisdom. It is the first time she has talked to a tree.

As part of the FB group, I have connected GOM to a worldwide grid of humans and trees supporting each other. I can tell his job is easier because of that.  The FB group has been pouring their love and prayers. I get the impression that it helps GOM and the other trees to feel connected, and their task is getting lighter. Since then, Lenna has received other messages, and also said he is softening, easier to talk with.

Lenna reports that the hostile aspects of humanity in the park have abated. Also, more women are coming to the park. It’s amazing to witness both the uplift of humanity and the improvement in the trees’ unpleasant tasks. Lenna even said that sometimes the human park and tree energy is mellow!

What are your experiences with the emotional lives of trees, their relationship with humans and their wisdom?

Your body knows how to heal. I tune into your body’s innate wisdom to communicate with muscles, joints, and other tissues. I teach you to breathe love, compassion, and gratitude to activate that intelligence for better health. I also teach classes and workshops to communicate with nature, and to use your body to know when nature is communicating back. The Devas (Sanskrit for “shining ones”) are waiting, so that you, too, can become your own Body Whisperer! View more posts